The hospital said the campaign's goal is to promote the importance of athletic trainers and help football teams in Nebraska stay safe on and off the field.
Monday, August 10th 2020, 12:27 PM CDT
By News Channel Nebraska 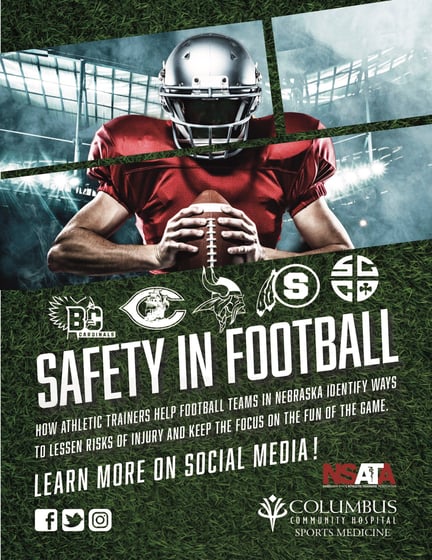 (COLUMBUS, Neb.) – Columbus Community Hospital is proud to be taking part in the “Safety in Football” campaign, which was organized by the Nebraska State Athletic Trainers’ Association. The goal of the campaign is to promote the importance of athletic trainers and help football teams in Nebraska stay safe on and off the field.

The theme of this year’s campaign is “Safety in Athletics begins with having an Athletic Trainer.” From August 24 to September 4, numerous high schools and colleges/universities throughout the state will be donning a small helmet sticker on the back of each player’s helmet. The sticker represents the cumulative efforts of these schools and the NSATA towards improving the overall safety of all sports in Nebraska.

According to the U.S. Consumer Product Safety Commission, “in 2007, more than 920,000 athletes under the age of 18 were treated in emergency rooms, doctors’ offices, and clinics for football related injuries.” According to the Korey Stringer Institute which researches sudden death in sport, 13 high school players and one youth football player died during the 2015 football season. One of these deaths occurred in Nebraska.

A 2012 study conducted by the American Academy of Pediatrics demonstrated that the presence of athletic trainers in the secondary schools lowers overall injury rates, improves diagnosis and return-to-play decisions, and reduces the risk for recurrent injuries.

CCH is proud to staff athletic trainers who serve area athletes each season. To learn more about the athletic training services at CCH, visit www.columbushosp.org.