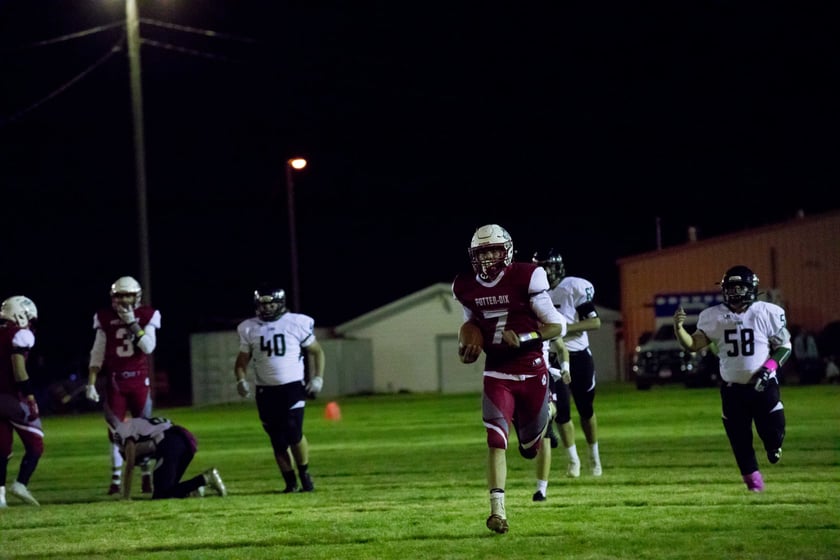 The Coyotes (8-0), appearing in their 14th postseason (second straight), will host #16 Sioux County (4-4) on Friday at Combs Field in Potter. Kickoff is scheduled for 5 p.m.

The Warriors, from the Class D6-7 district, finished the regular season with a win over Banner County on Friday, 64-0. Sioux County is making their fifth appearance in the playoffs in school history. Their appearance in 2019 was their first since 1999. They beat Sterling in the first round before falling to eventual champion, Harvard, in the second round.

Potter-Dix defeated Sioux County, 62-8, on Sept. 3. It was the season opener for the Warriors.

On defense, Kasten recorded 11 tackles, 7 tackles for loss and 3 sacks. Anton had 9 tackles and 4 tackles for loss. Sophomore Caden McConnell, senior Thomas Muldoon and sophomore Brandon Paxton each had an interception.

Senior Tucker Monroe recorded the lone touchdown for the Warriors.

Potter-Dix's first round win over Wallace in 2020 was their first win in the playoffs since a 32-22 victory over Cody-Kilgore in the first round of the 2007 postseason.

This year's six-man state championship will be held at Ron and Carol Cope Stadium at the University of Nebraska-Kearney on Nov. 19.

Follow Potter-Dix through the postseason on 987 The Big Boy (98.7 FM, newschannelnebraska.com and the NCN app).